EMQG President Nela welcomed all in attendance, including 1 new member and 1 guest. We had 17 members who renewed in December and another 9 who renewed or joined in January.

The Quiltcon Charity Quilt was quilted by Denise Nash and shown; beautiful work! There are some words quilted in it which say “Kites rise highest against the wind, not with it” a quote from Winston Churchill. Jenny and Daisy volunteered to bind and apply a sleeve to finalize the sewing and the members present decided to sent it to Las Vegas for their charity to help victims affected by the shootings last year. 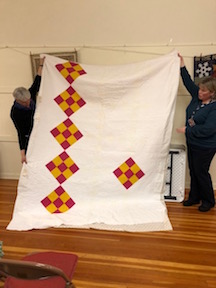 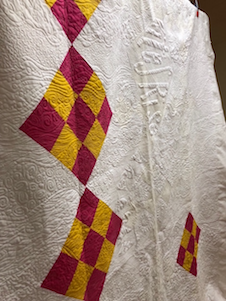 The idea of having sew days together was well received and it was decided to try to rent a weekend day 4-5 times this year at our current meeting location, the Eugene Garden Club. Nela is going to check on dates available. It will be paid for by the participants who attend that day, and will be held for 6 hours.

The guild was presented with an opportunity to help raise money for the Alzheimer's Longest Day project. Pat moved to vote on this, Daisy seconded it and it was voted yes to help with this. Members decided to donate money when attending sew days several times during the year.

Each month participating members would challenge themselves to try to complete some part of a project and commit themselves by writing it down, with the goal of finishing this task by the next month’s meeting. The participant would bring a modern fat quarter and place it in the kitty, and then the next month they would bring their project to the meeting to ensure it’s completion, during which their name would be entered into that month’s drawing for the fat quarters gathered at last month’s meeting. Members present agreed that this might be a fun challenge and a way to finish some long stored and lost (but found) UFOs.

Members who decided to participate in this new “adventure” brought their medallions and guide/journal books and shared their visions of the quilt to be created. We had many participants and quite a variety of designs/colors/sizes to make this a fun challenge for all. Can’t wait to see what each month brings as more blocks are added each time!


It was decided to only have finished projects at show and tell time this year. Below are beautiful works that were offered for viewing this month.