Sew Night:  Sew Night for October has been cancelled due to lack of participation.

Sew Day:  Sew Day for October has also been cancelled due to lack of participation.

EMQG Retreat recap:  Our first Eugene Modern Quilt Guild Retreat was an outstanding success!  15 members plus one guest had a great long weekend in September at McKenzie River Mountain Resort in Blue River.  We had fun times, good food, quilt lessons, games, and really got to know each other much better.  11 of us had never been on a quilt retreat and this was a great introduction.  Huge thanks to Pat Johnston for putting so much effort into everything! 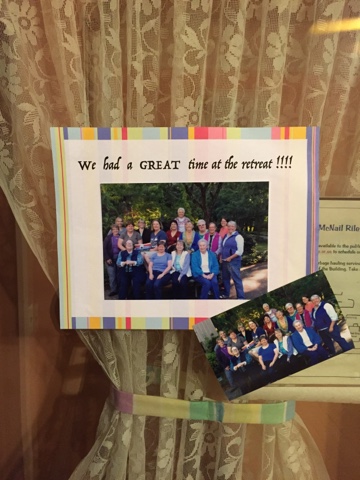 Our Sewing Room:  The EMQG will no longer have regularly scheduled times.  OSR is moving to a membership system starting in January, in hopes of a more financially viable situation.  Individuals can buy memberships for 3 months at a time, $20 per month for 8 half days or 4 whole days.  Walk-ins are still welcome if there is space.  The group fee will be $75 for one event.

2016 Dues:  EMQG dues are $25 for the year and we will start collecting them at the November meeting. If we decide to still be a guild.

Workshops: Corvallis Modern Quilt Guild has invited us to attend their workshop in Philomath on October 31.  See the EMQG (October 6th post) blog for details.  Also the Emerald Valley Quilters are having a workshop this weekend with June Jaeger on pictorial quilting.

November Meeting Program: Candy, the new owner of Piece By Piece Fabrics, will be here to share the newest trends in quilting gleaned from the Fall Quilt Market.

Speaker:  Pat asked whether members are interested in having a nationally/regionally recognized quilting speaker come and teach a class for us at Our Sewing Room sometime next year, since there has been so little interest in Sew Day/Night.  There would be costs involved.  Several members expressed interest,so it is worth pursuing the idea.

Portland Quilt Show:  Pat went the quilt show in Portland last month and really enjoyed it.  It was a great show ranging from very traditional to ultra-modern.  She highly recommends attending next year.

ELECTIONS FOR 2016:  We have members willing to take on the Vice-President, Secretary/Web, and Bee Block/Swap positions.  No one has stepped forward to do the President or Program positions.  Please give strong consideration to these positions– the Eugene Modern Quilt Guild needs YOU!  The President will have the Vice-President to give them a lot of help next year!  If we don’t have a president, we will have to drop our Modern Quilt Guild affiliation and turn into a much looser group.  Call or email any of the current board members with questions, or email eugenemqg@gmail.com .  The current board is Madyson, Daisy, Pat, Anne, Linda, Nelda, Karen, and Jessica Beaudet.

Elections will be held at the November meeting.

It is not too late to purchase raffle tickets at $1 each for our modern quilt!  The raffle will be held at the December meeting.

We are also having a raffle for a $50 Euphoria Chocolate gift card!  It has been generously donated by member Bonnie Glass, co-owner of Euphoria.  Tickets are $1 each and the raffle will be held at the December meeting.

Linda Delaplain received her Bee blocks for October made from strip-pieced bright and colorful batik fabrics – really fun all together.  Daisy passed out her November Bee blocks – “Outside the Box”.  They are a 9-patch framed off-center by the background fabric.  Nelda Copsey mentioned it is time to think about participating in next year’s Bee.  It would be especially good if someone wants to sign up for January and get the ball rolling. 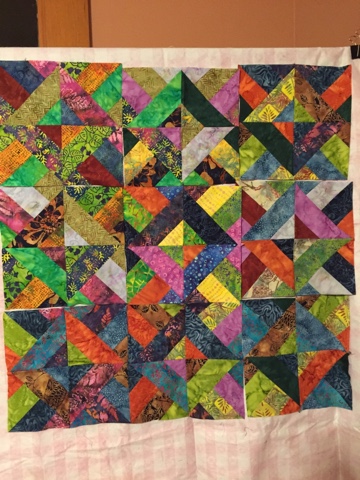 October’s theme was “Mirror”, which only had Pat participating.  She made a great piece combining Mylar with fabric and said she learned a lot and really stretched herself, which are the goals of Permission to Play.  The November theme is “Past”, so get creative and join Pat in stretching your talents!

This month’s theme for the swap was “Fall or Halloween”, producing some cute mug rugs and coasters, and a very fun spider!  Karen McClain announced the theme for the November swap is “Apron or Potholder”.  Time to think about the upcoming holidays! 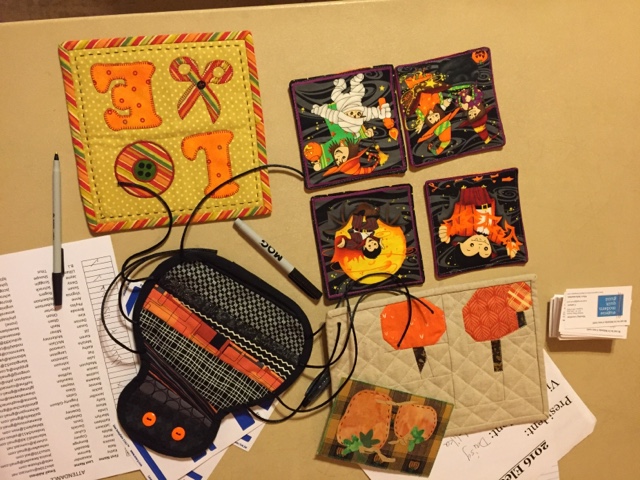 NEW IDEA:  Nela Barrow and Kim Olsen presented a new idea that came from the retreat, based on a block-of-the-month.  Each participant would make a block for themselves out of their own fabric, using a different skill each month.  One person would sign up to be the “expert” each month, briefly presenting the Skill-of-the-Month at the meeting along with tips, tricks, and suggestions of tutorials, etc. for help.  There would be no commitment, just make which ones you want.  If you wanted to make multiple blocks in a month, the extras could go to a charity quilt.  Come to the November meeting with ideas for the monthly skills and what knowledge/talents you could share with the group!

Pat gave a brief demonstration of a new way of making a pineapple-type block.  It is easy and looks great.  Maybe it could be a Skill-of-the-Month for next year!  (See New Idea above)

Be sure to attend the November meeting and hear about the latest in quilting trends from Fall Quilt Market.  Candy, from Piece By Piece, will be our program speaker.

Denise Nash:  Wall-hanging top done in raw-edge applique as a picture based on a photograph of an autumn tree.  She learned the technique at a recent workshop in Coburg.  Wonderful piece, preserving the unusual perspective of the photograph. 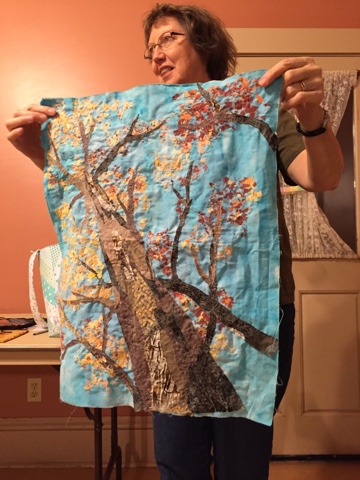 Anne Robertson:  Baby quilt from a Moda Bakeshop pattern.  The top was completely done at the retreat (see what uninterrupted sewing time can accomplish!) – pieced and quilted by herself. 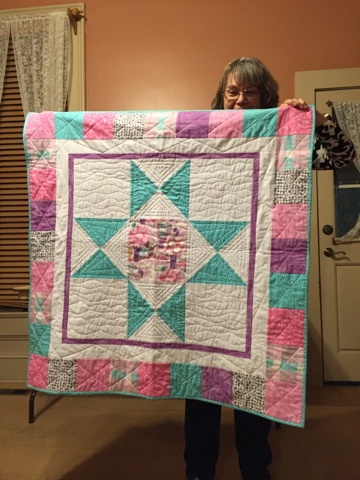 Pat Johnston:  Handbag, made with fabric and Craft-tex in arecent class at Piece By Piece.  Very nice! 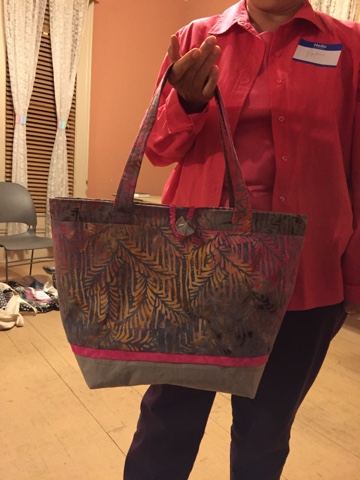 Janice Hoffine and Linda Delaplain:  Showed their blocks made from the Color Therapy lesson at the EMQG retreat.  Linda also shared a table runner made with the help of her Brother Scan-and-Cut machine to perfectly cut the petal and round shapes.  Also, she talked about her recent fun visit to the National Quilt Museum in Paducah, Kentucky. 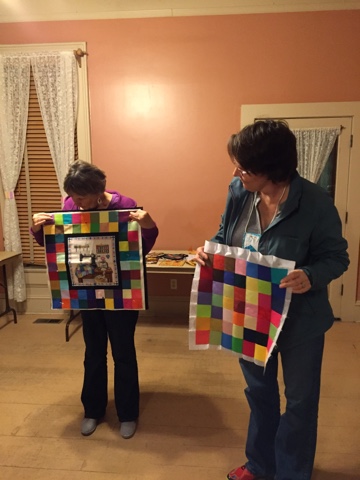 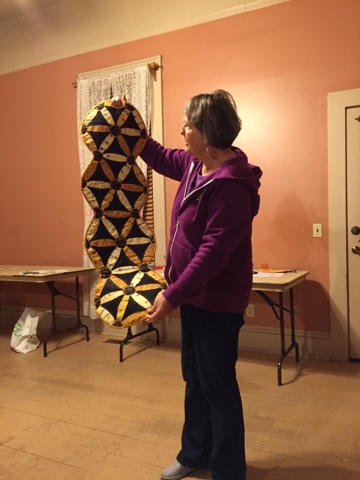 B.J. Titus:  Wall hanging of a giant flower with 3-D butterflies.  It was just shown at the Pennsylvania State Quilt Show, where she has exhibited for several years.  Beautiful piece! 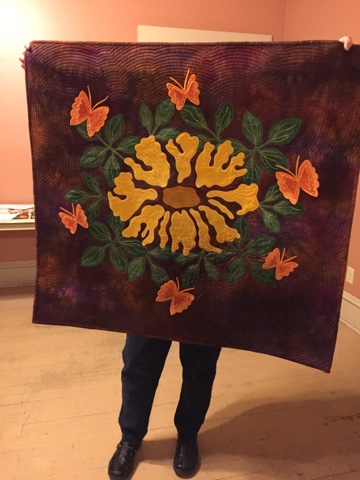 Kim Olsen:  Mug rugs made from retreat scraps of others – very bright and fun! 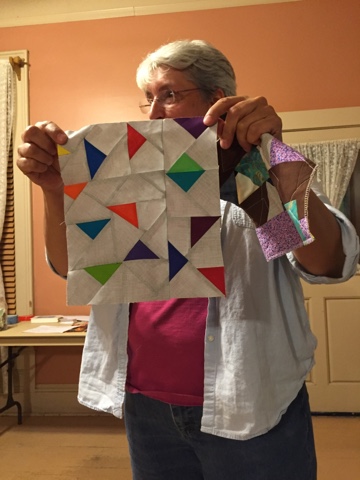 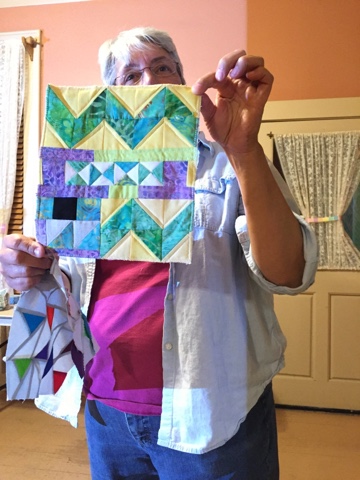