Kathleen Culver will be the honored artist with all her quilts displayed. Her husband will also be showing his woodcarvings for the evening. Kathleen’s quilts will be displayed for two months, so drop by and take a look!

Raffle Quilt: We will begin sewing the blocks together so bring any blocks (completed or not!) you still have, or bring your own project to work on.

Continue putting the Raffle Quilt together.

There will probably be a meetup during the day of Modern Quilt Guilds, and Madyson is organizing an EMQG group to go to the show just for the day, planning to arrive at 9 am. If you are interested in carpooling, email eugenemqg@gmail.com or Madyson.

EMQG and CMQG are meeting for a fun get-together at Sweet Earth Vineyards in Monroe. A tote bag swap will be held so get busy sewing! Bring a quilt you would like to show as there will be clotheslines to hang quilts on. Wine tasting will be available and the event is open to others besides MQG members, so bring a friend. Email EMQG or Madyson if you are going and whether you are participating in the tote bag swap. See the EMQG blog (June 4 entry) for more details.

Coburg Quilt Show: Saturday, July 25 We need several volunteers to staff the EMQG booth throughout the day (in shifts or all day). Jenn Fogerty-Gibson will again be loaning us her booth to use. An ice chest or two with cold water or drinks would also be great.

Lane County Fair: July 22 – 26 Kathy Langston announced for Nelda Copsey that Textile entries are open for registration online (www.atthefair.com) and many volunteers are needed to help. You will get a free fair pass for volunteering! Email Nelda with questions.

Raffle Quilt: We need to have the quilt done before the Coburg Quilt Show so that we can display it and sell lots of raffle tickets! The actual raffle will be held later in the year. Missy Downey is donating the batting for the quilt, Denise Williams volunteered to quilt it, and Jessica Beaudet volunteered to do the binding. We are donating half the proceeds of the raffle to a charity and Madyson suggested Womenspace. Pat Johnston made a motion, it was seconded, and the members voted and passed the motion to donate to Womenspace.

The Cloth Pocket: www.theclothpocket.com They have contacted Madyson and are offering EMQG members a 20% discount online. The discount code is on the EMQG blog under “Local Shops & Guilds”. They also sent items for door prizes!

Julie Johnson announced that the Cottage Grove Theatre is putting on a play later this year, “The Quilters”, about pioneer women. It promises to be a good show. 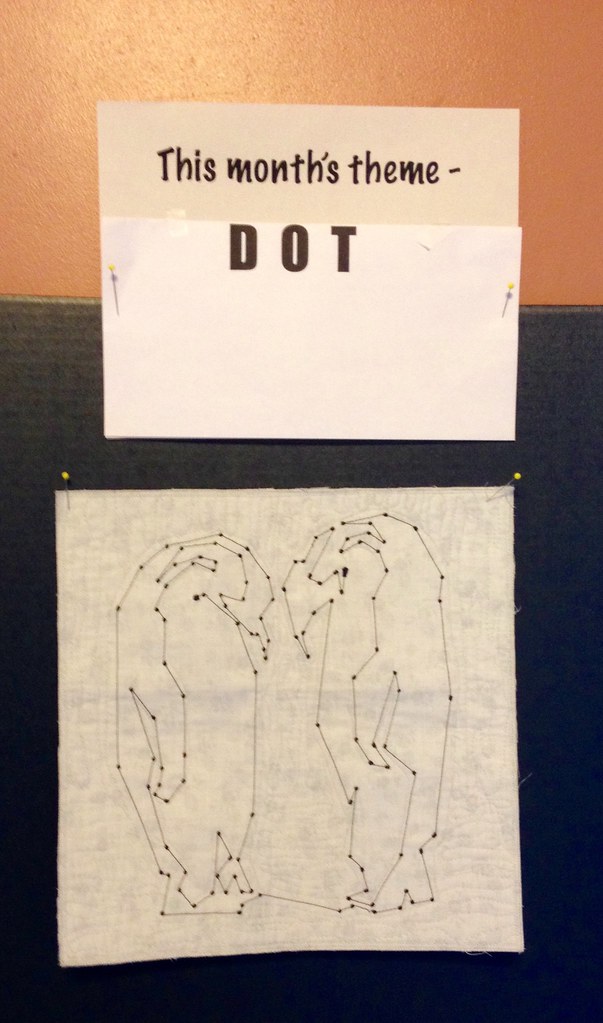 Pat showed the June pieces following the theme of “Dot”. As usual, they were creative! Solids, dot-to-dot, and a shadowing technique using sheer fabric were used. The July theme was drawn and will be “Heat”. An appropriate theme for the middle of summer, so time to get creative! 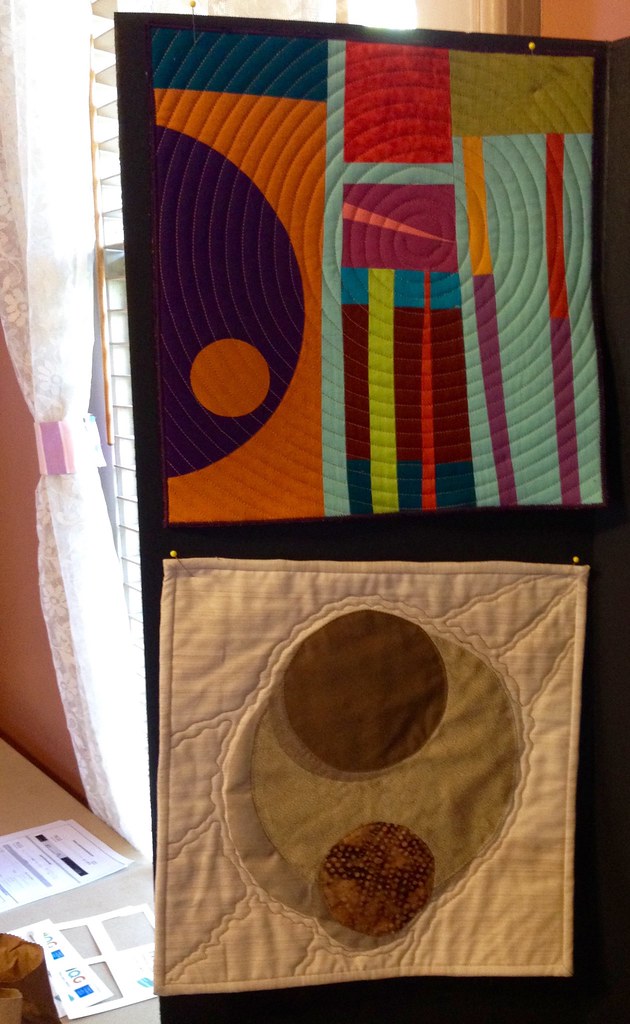 Pat took over for Karen McClain. June’s swap was “Curve”, which only had two participants, but were a lovely mini wall-hanging and a fun mini bag. July’s swap will be a tote bag. Make two – one for the Corvallis Meetup and one for the EMQG swap!

Kathy Langston stepped in for Nelda. Phyliss Porter was June’s Queen Bee and received a nice variety of blocks, all of different designs. Jayne Scoggin is July’s Queen Bee and passed out her block packets. The blocks ended up kind of complex so she has already done some cutting and sewing and included instructions. They will be 14.5 inch blocks made from 4 smaller blocks.

Jessica Beaudet: “Meridian” bag using two quilt blocks incorporated into a leather bag. The quilt pattern is Jessica’s and has just been published by Alison Glass Designs. Pieced and quilted by herself in 2015. Jessica may be doing a class later.

Julie Johnson: “Painted Leaves” pieces from the class taught by Jayne at the last Sew Day. Pieced and quilted by herself in 2015.

Side Note by Jayne: “Several attended the Sew Day class and it went well. It was fun to get to know people!”

Kelly Duke: “Giant Swoon” large quilt in green and yellow, for her nephew who is graduating from UO. He won a “Biggest UO Fan” award so it is a very fitting quilt for him! Pieced and quilted by herself in 2015.

We had a very informative and interesting program from Milly of Paramount Sewing on Threads and Needles. Milly answered a variety of questions from several members. She is a wealth of information and did an excellent job of explaining the reasons behind her recommendations. She passed out helpful handouts covering both topics. We will see if we can get copies to post for those interested.

In a fun end to the meeting, names were drawn from those present for some door prizes. Pat donated two mini-buckets of thread which were very cute (and useful!). Madyson handed out several prizes donated by The Cloth Pocket of fabric packets and patterns. And a visitor/new member won one of them! 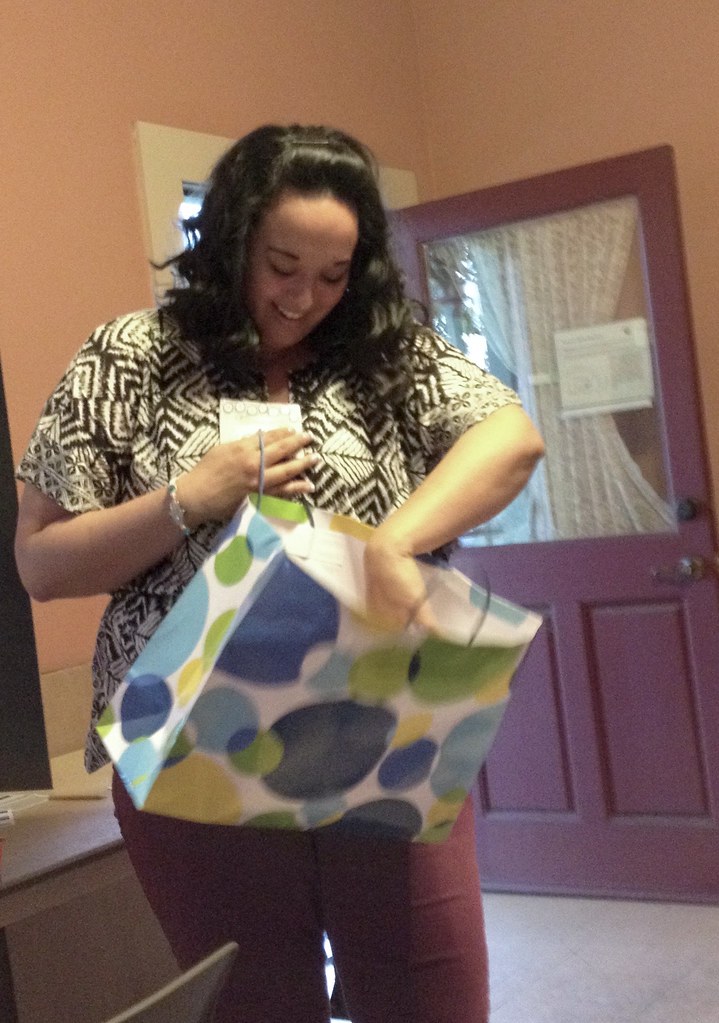 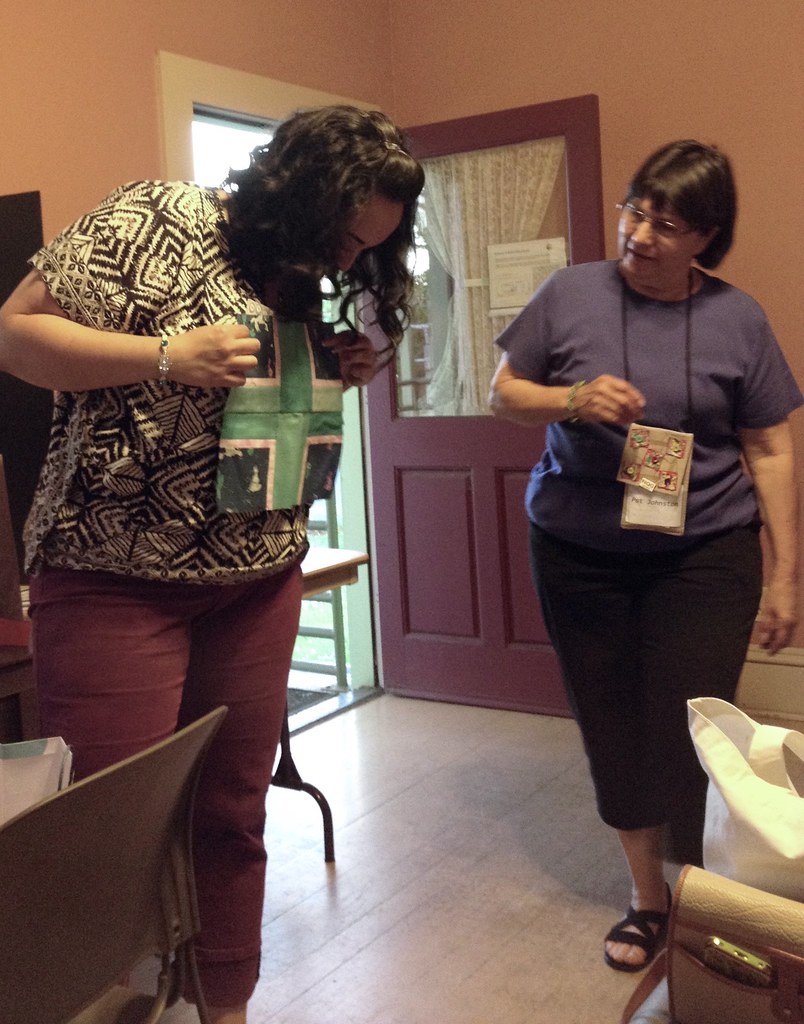 Standing in for Karen, the organizer of the special presentations, Pat presented Madyson with a quilt’s worth of blocks, made by members, in honor of her recent wedding and hard work as EMQG president. At the May meeting, Karen presented Jenn Fogarty-Gibson with a similar batch of blocks, also made by members, in honor and gratitude for her past service as EMQG president. Both sets of blocks were made from members’ fabrics using the on-line tutorial, “Intersection Block” at www.filminthefridge.com . And both ladies were a bit over-whelmed, so we were successful at being sneaky, thanks to Karen!
at July 01, 2015