Craft Fair: Benefit fundraiser for Daisy C.H.A.I.N., an organization which helps families with new babies, at Daisy’s Place, 1244 Lawrence Street in Eugene, April 18 – 19, 12 – 4 pm. Lillian Shoupe belongs to it and will be selling some of her crafts at the fair.

Unbroken Thread Quilt Show of the Pioneer Quilters will be held April 21 – 26 at the Lane County Historical Museum at the fairgrounds. 90 quilts of all types will be displayed with daily speakers and demonstrations. There is always a lot to see!

At this meeting, we had six visitors, two of whom joined our guild!

Photos – Photographs taken at the EMQG meetings are on the Flickr and Instagram websites with links to them on the blog.

Raffle Quilt – It will be made from the paper pieced pattern “Use Your Illusion” by Cheryl Brickey, which was the Modern Quilt Guild’s March Pattern of the Month. The Kona Gray fabric was donated, and the Kona Turquoise was purchased at a discount. We will be cutting and sewing the blocks during April’s Sew Night and Sew Day. Madyson will make the paper copies for the piecing, and we will make up packets of blocks for those who want to sew them on their own. A sign-up sheet was passed around for packets.

Proceeds from Raffle Quilt – It was suggested that a portion of the proceeds from the raffle quilt be donated to a charity. Phyliss Porter made the motion and the members voted and passed the motion. Email EMQG with suggestions of the charity to support. A previous suggestion had been made of the free mammogram program of Cascade Health Solutions, but it is being disbanded due to the new insurance provisions.

Corvallis MQG – A meetup held at a winery halfway between Corvallis and Eugene is being planned for this summer. Meetup plans are still being discussed, possibly including a swap.

Podcast needs quilt stories – Missy Downey has friends who do podcasts at Houstory.com (also on Facebook). They are looking for stories about heirlooms people have, and especially looking to speak with someone about quilts or quilting stories to add to their podcasts. Contact Missy if you are interested.

Fabric Leaves Class – Pat Johnston and Jayne Scoggin are setting up a class to make fabric leaves such as in Jayne’s wall hanging of hand-dyed fabrics. This will be at Sew Day on May 23. More information and signups will be at the May EMQG meeting.

EMQG Quilting Retreat – Set for September 17 – 20 at McKenzie River Mountain Resort in Blue River. Pat is waiting for the contract, Daisy Schrock is coordinating food, and Nelda Copsey is helping. A signup sheet was sent around. The resort web site is www.mckenziemountainresort.com for those who are interested. The total cost for the three nights with meals is estimated at $283. A 3-step payment plan will be set up requiring a deposit soon. Also there will be a no-refund date set. A minimum of 15 participants is needed to secure the resort contract, which does not seem to be a problem from the level of interest shown so far!

Yard Sale – Kelly Duke announced at the end of the meeting that tonight’s yard sale made $57! There were a lot of goodies going home with new owners.

Nela Barrow received her bee blocks for April, which were large rainbow strip blocks made from the makers’ own strips. Very bright and fun!

Denise Nash is the Queen Bee for May. She gave out packets of fabric to make 10.5” x 16.5” blocks using a favorite technique. Anything goes, and she shared online tutorials for examples. She would like any leftover scraps back.

April’s swap was two fat quarters – one ugly and one modern. There were lots of fun fabrics swapped, although none appeared to be very ugly!

Karen McClain announced May’s swap is a thread catcher or sewing accessory made by you.

April’s theme was “High-Fibre Diet”. Perhaps this was a more difficult idea as only two pieces were displayed, although both were fun to see. 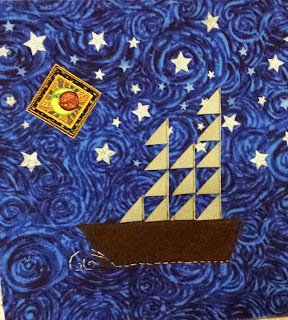 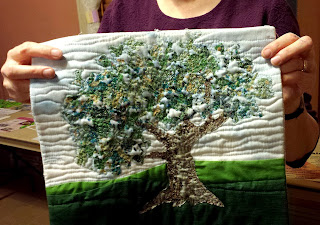 May’s theme is “Gossamer Spring”. Time to get creative!

Kathy Langston and Nelda Copsey: Showed the annual quilt to promote Donate Life Northwest. The quilt blocks are made by donor’s families or recipients of organ transplants. The quilt is accompanied by a book of stories about each block and is an amazing and touching display.

Kathy also showed her Bee Block quilt made from the green and blue ribbon blocks from January, 2015.

Pat Johnston: Quilt started out as a Margaret Miller – Easy Pieces pattern, but she set it using Missouri Star’s sashed and slashed 9 patch method. Pieced by herself and quilted by Susan Miner. Finished in 2015.

Susan Rogers: “Hawaiian Sunbonnet Sue” with pattern by Donna Fear. Pieced by herself and quilted by Jayne Scoggin in 2015.

Meisha Linwood: “Owl at Night” baby quilt designed and pieced by herself in 2015.

Linda Delaplain: “Circle Sorbet” pieced and quilted by herself in a quilt as you go method in 2015.

Denise Nash: “Tree” art mini-quilt made in a confetti quilting class by Judy and Angelia Peterson (www.quiltedpics.com). Pieced and quilted by herself in 2015. 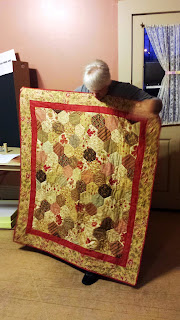 Mystery star quilt top in pattern by Debbie Caffrey pieced by herself at a retreat last month. 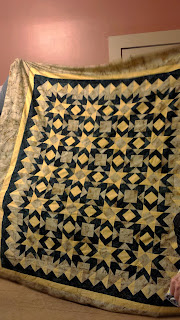 Kelly Duke: A trip-style baby quilt designed, pieced, and quilted by herself in 2015. 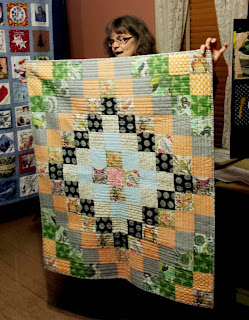 Nela Barrow: “Austin Houses” A paper pieced mini quilt made in a class at QuiltCon. Pattern and class by Carolyn Friedlander, pieced and quilted by Nela in 2015. 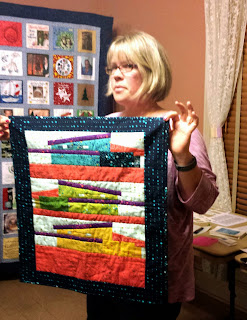 Marilyn Davis (new member): A beginning quilter, she showed a pillow made from jelly roll strips and coasters. 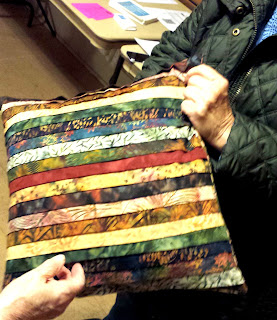