Hi guys!!  I am back (Jessica Beaudet) and trying to navigate what is going to work for us this year regarding the blog and getting information out in a timely fashion.  I would like our blog to inform and inspire us.  Let's make it reflect the enthusiastic modern quilters that we are!  That said, I am feeling already a teeny tiny bit behind because TONIGHT is our SEW NIGHT and the dark is already falling outside my window as I type. My apologies, the swap and show and tell info will come in another post-- We must have the pretty pictures!! :)

*check it out, if you want email updates from our blog- LOOK over here on the left!!  Sign up at "Follow by email." Get updates sent to right to your email, it will be more fun than watching a duck waddle across ice.

EUGENE MODERN QUILT GUILD
Meeting Notes   January 14, 2015
Presenter:  Phyliss Porter
Minutes:  Anne Robertson
Photographer:  Madyson John
UPCOMING EVENTS:
Sew Night:  Wednesday, January 21 at McNail-Riley House at 6:30 pm
Sew Day:  Saturday, January 24 at Our Sewing Room from 10:00 am to 4:00 pm
A Color Runs Through It Textile Group Show at the Maude Kerns Art Center in Eugene is currently running through February 6th.  It is very good and well worth your time to go see it.  Daisy Schrock passed out postcards with the information.  The hours for the show are Monday - Friday 10:00 am – 5:30 pm and Saturday 12:00 – 4:00 pm.
ANNOUNCEMENTS:
Daisy has collected 49 blocks for our 2015 Charity Quilt, which will make a nice twin-sized quilt.  She is going to start putting it together on Sew Night.  Thank you to everyone who contributed blocks! 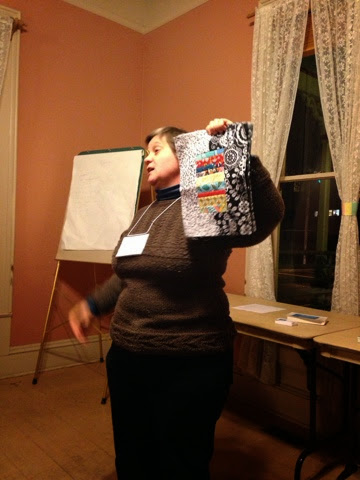 Shawna Haynes has stepped down as Webmistress/Photographer.  Jessica Beaudet has volunteered to take her place, and, since Jessica was in charge of the Monthly Swap, Karen McClain has volunteered to take over the Swaps.  Thank you, ladies, for stepping up!
Madyson has created new calendars for 2015 that show all the dates for EMQG meetings, Sew Nights, and Sew Days, with spaces to write in other events.  The guild has paid for printing them, so please take one to help keep you organized.  If you want to print more copies for yourself, email the guild at eugenemqg@gmail.comand Madyson can email the file to you.  The calendar looks great – thanks Madyson.
Madyson announced that Corvallis Modern Quilt Guild would like to meet with us in the summer and include a Swap, maybe of tote bags.  She asked for ideas, and suggestions were made for a potluck, picnic at a park (with a picnic shelter after our August experience last year!), and having “Secret Pals” to swap with from the other guild.  Everyone was excited at the prospect of getting to know another modern quilt guild.
Jennifer Fogerty-Gibson is donating her ironing board and iron to EMQG to store at McNail-Riley House for Sew Nights.  Madyson said the turn-out for Sew Night has been poor in the past months, so she will open the door at 6:30 pm and if no one else shows up by 6:45 pm she will close up and leave.  The usual end time for Sew Night is around 8:30 pm.
Our Sewing Room (where Sew Days are held) wants modern quilts to hang on their walls for display.  The quilts will hang for one month, and they will be displayed during February’s Second Friday Art Walk in Springfield.  Please bring them during Sew Day on January 24th.  If you can’t make it to Sew Day, email EMQG and Madyson can meet you to pick up your quilt.  Any size modern quilt is fine and Our Sewing Room can hang quilts with sleeves or without.  They have a lot of wall space for display, so don’t be shy about sharing!
We are now filling out forms for Show & Tell.  It is strongly encouraged to email the form before the meeting if you have something to share.  Otherwise, you can still fill out paper forms at the meeting but those who emailed will get to show and tell first!  To email your form go to the EMQG web site and click on the SHOW AND TELL tab at the top.  Then copy and paste the form with your information filled out in an email to the guild (the email address is in the instructions).  The forms help the Show & Tell process move along faster.
MIA – Madyson said that the SAQA (Studio Art Quilt Associates) catalog given to EMQG at the November meeting has gone missing.  Would whoever has it please email EMQG right away and/or bring it back?  Other members would like to see it.
BEE:
Nelda Copsey suggested several ideas for the Bee Block group.  For this year, a goal is to have more modern blocks and try for more complicated patterns, rather than simple ones.  Another goal is to make the Bee Blocks a learning experience so that the participants stretch their abilities.
Julie Johnson received her blocks for December.  Nelda presented the January blocks for Kathy Langston, who couldn’t make it to this meeting.  They are for a Donate Life quilt and feature green or blue ribbons which are symbols for organ donation. 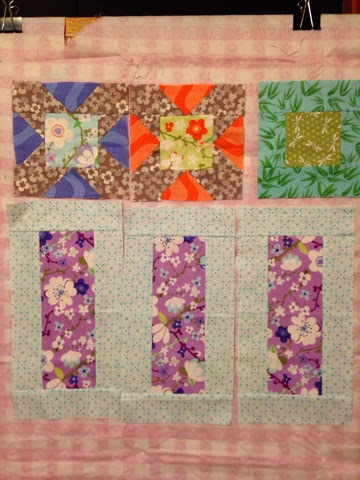 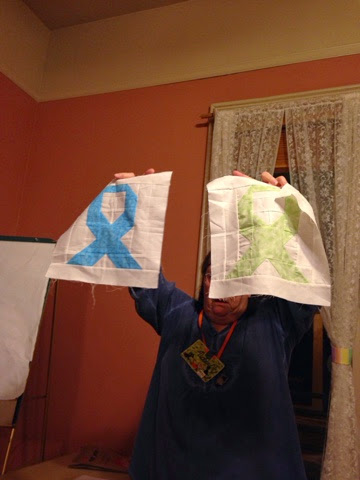 PROGRAMS:
For tonight’s program, Lillian Shoupe gave a great presentation on binding quilts.  She went through the whole process with lots of samples, giving several variations, and sharing what she has concluded works best for her.  Thanks for all the helpful tips! 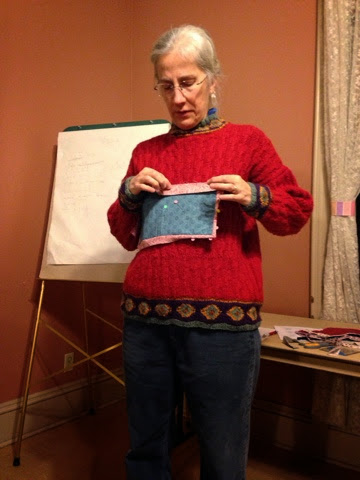 Pat Johnston shared the program plans for the next few meetings:
February Meeting – Madyson will be showing members how to navigate the EMQG web site/blog and retrieve information, and all the resources on the national Modern Quilt Guild web site.  Since we’re part of the Modern Quilt Guild, we should take advantage of these resources our guild is paying for, rather than re-creating them on our own web site.  Madyson is hoping to bring a projector so everyone will be able to see.  She will also show quilts/blocks she has received in swaps via the internet and mail.
Daisy will show samples of her “quilt as you go” technique at the February and March meetings.  At the March Sew Day, she will give a demonstration/tutorial at two different times during the day for anyone interested in learning this technique.
March Meeting – Linda Delaplain will share the fabric rugs she makes.  She will give a demonstration/tutorial of her technique at the March Sew Day.
SWAP:
This month was Coasters and we enjoyed the fun fabrics and unique shapes that members came up with!
Karen, as the new Swap organizer, handed out a survey to help her come up with ideas for the year.  The February swap will be Scarves. 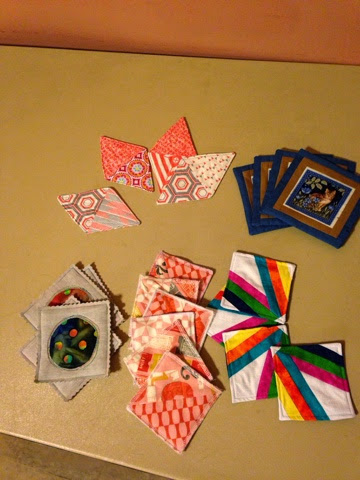 PERMISSION TO PLAY:
Pat introduced the inaugural group of finished Permission To Play pieces.  The idea is to create a 12” by 12” quilted piece focused on a specific theme, which will be randomly chosen each month.  January’s theme was “Shelter” and there were several wonderful pieces with very different interpretations of that theme.  As Pat said, the interpretations ranged from whimsy to ancient history, and were very fun to see.  What amazing talent we have in our guild! 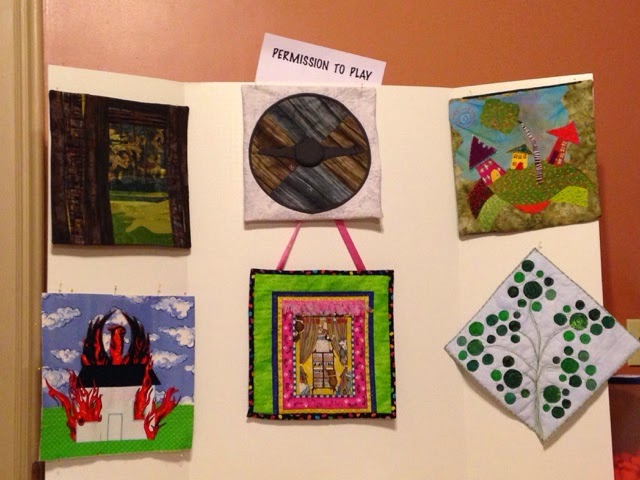 February’s theme was randomly drawn and will be “Night Reflections”.  Time to get creative!
And last, but of course far from least,

SHOW AND TELL:
Nela Barrow:  “Oregon Sunrise”.  Modified Candy Dish pattern by Jaybird Quilts, pieced and quilted by herself in 2015. 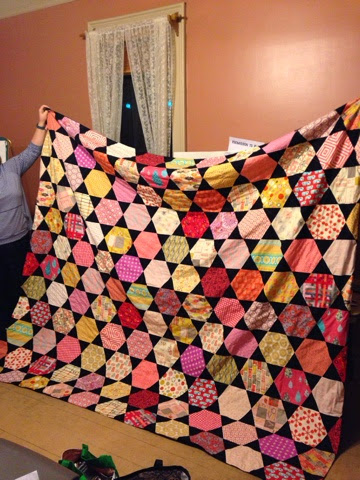 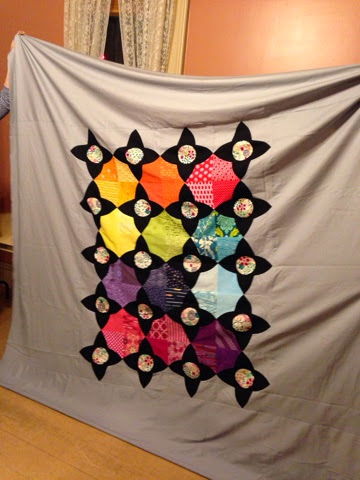 Anne Robertson:  “Rudolph the Red-Nosed Reindeer”.  Pattern created and pieced by herself in 2014, quilted by Denise Williams. 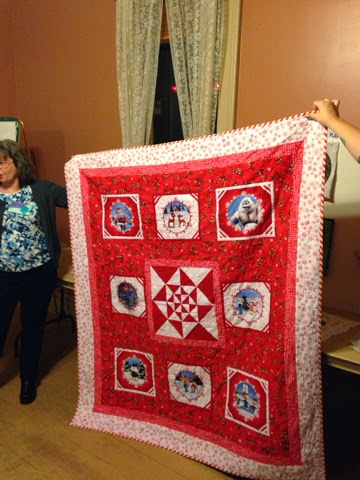 Nelda Copsey:  “Southwest Theme”.  Blocks made by online BOM group, pieced by herself in 2015. 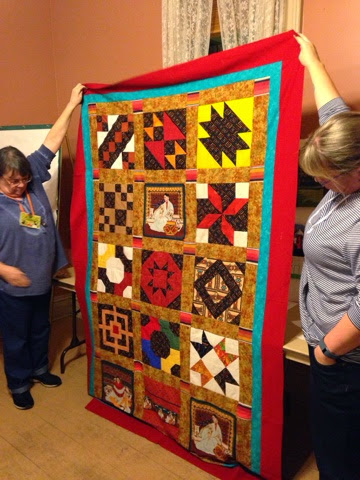 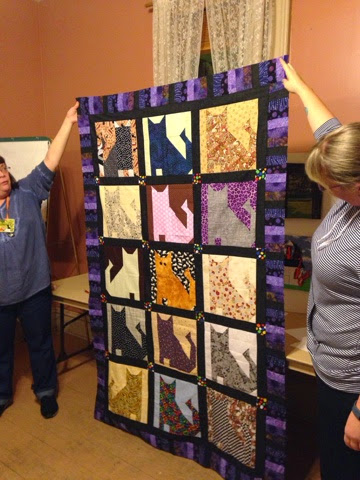 Jayne Scoggin:  “a small modern quilt”.  Pieced and quilted by herself in 2014. 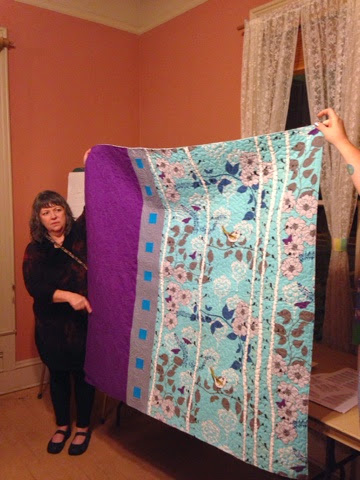 Phyliss Porter:  “a large quilt for her son”.  Pattern by Saw Tooth.  Pieced by herself in 2014, quilted by Jayne Scoggin. 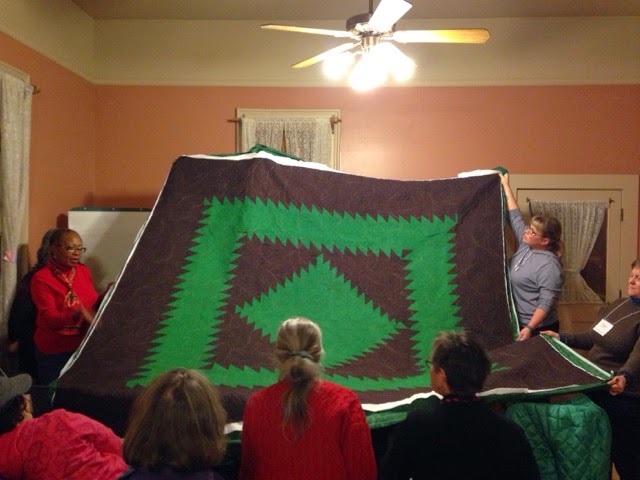 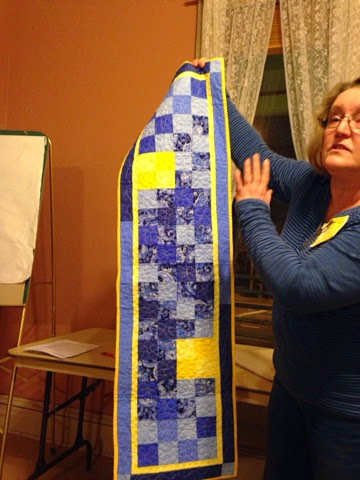 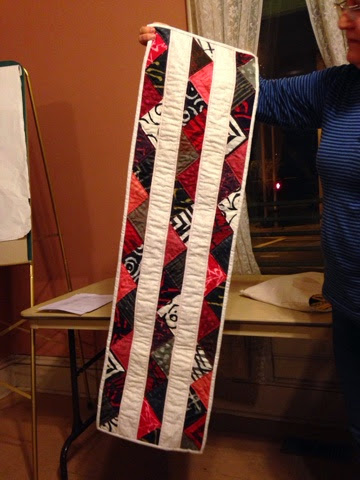 Jennifer Fogerty-Gibson:  “Vy’s Quilt” and “Eve’s Quilt”.  Patterns created, pieced, quilted by herself in 2014-15 for her friend’s 2 exchange students. 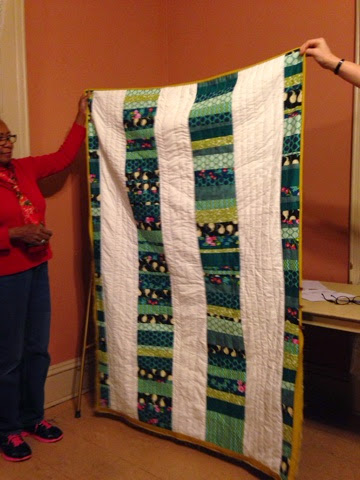 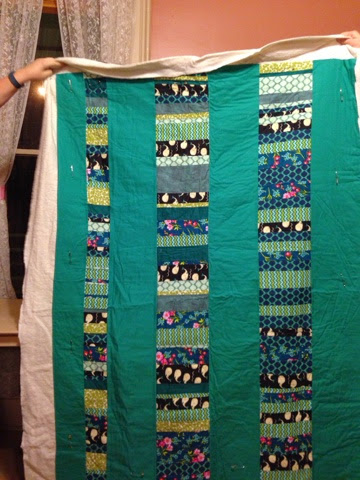 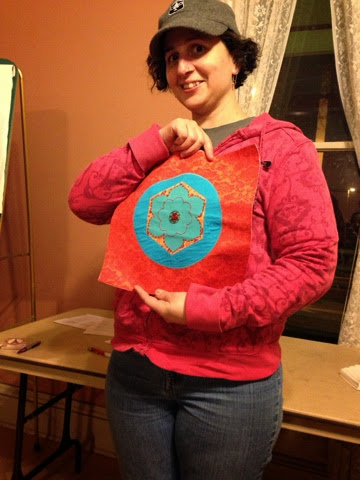 Justine Heavilon:  “pink floral on black”.  Pattern created, pieced, quilted by herself in 2014 for her granddaughter. 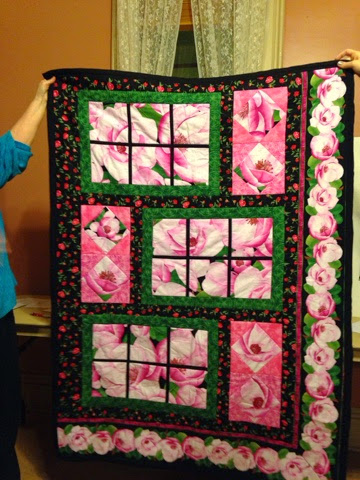 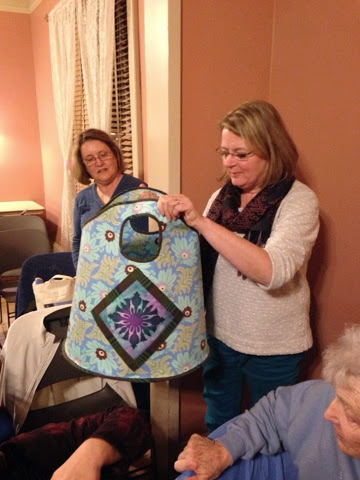 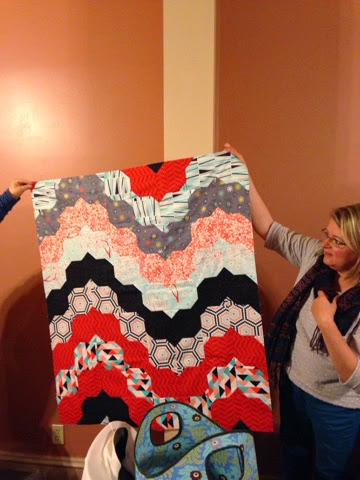